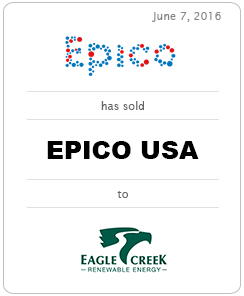 TM Capital served as exclusive financial advisor to Epico Srl, an Italian Operator of hydro and other renewable energy facilities, in the sale of Epico USA to an American hydroelectric operator backed by private equity investors. The success of the transaction reflects TM’s ability to frame the benefits of the significant recent capital investments made by Epico in its plant infrastructure as well as the Company’s “in-process” efforts to qualify the plants for valuable compliance renewable energy credits within the ISO New England region.

What Our Clients are Saying

“Having worked with TM Capital in the past, it wasn’t a question who we would use in this transaction. TM Capital’s intimate understanding of the renewable energy sector, solid industry relationships, and transaction experience were invaluable in guiding us through this complex process.”

TM Capital Corp. is a partner-owned investment banking firm based in New York, Boston and Atlanta, which has completed over 300 transactions with a combined value in excess of $17.5 billion. Since 1989, we have advised clients navigating a full range of critical transactions, including complex mergers, acquisitions, debt and equity financings, minority and majority recapitalizations, restructurings, and advisory services including takeover defense, fairness and solvency opinions and valuations. We have built deep industry expertise in key sectors and our team regularly publishes research highlighting current and emerging trends in targeted industries and markets. TM Capital is a member firm of M&A International Inc., the world’s leading alliance of mid-market investment banks with over 650 M&A professionals in 40 countries. Members have closed over 1,400 transactions totaling more than $75 billion in value over the past five years.

Get in Touch
for Press & Media